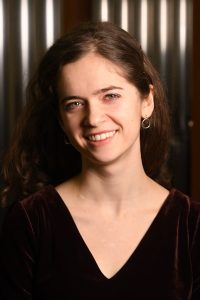 Clara Bartz as Director of Music at Most Holy Redeemer and Nativity Parish in Manhattan, New York, where her responsibilities include directing several youth and adult choirs, running a concert series and overseeing the restoration of the church’s 1891 Roosevelt organ.

Clara is a 2021 graduate of the Yale Institute of Sacred Music where she studied with Martin Jean. She recently graduated from the Curtis Institute of Music where she studied with Alan Morrison. She received first prizes in the Fort Wayne, Albert Schweitzer, AGO-Quimby Mid-Atlantic Regional and UNCSA School of the Arts organ competition and was the recipient of the 2020 Baker Prize in Organ Performance and the 2021 Julia Sherman Award for Excellence in Organ Playing from Yale. She has performed around the United States at a number of notable churches and concert halls and as the featured recitalist at the Church Music Association of America annual conference, the American Guild of Organists 2018 National Convention in Kansas City, and at Spoleto, Oregon Bach Festival, Philadelphia International Festival of the Arts and most recently the Uncommon Music Festival in Sitka, Alaska. Clara is an avid accompanist and collaborator, and has accompanied the choirs of St Joseph’s Seminary, Westminster Choir College, St Bartholomew’s Church NYC and a number of other institutions in liturgical and concert settings. 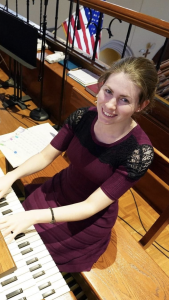 Maura is a graduate of Franciscan University of Steubenville, Ohio.  At Steubenville, she received degrees in Sacred Music and Theology, studying the organ under Nicholas Will.  She obtained her Master’s Degree in Sacred Music at Duquesne University, studying the organ under Dr. Ann Labounsky.  She also received choral instruction from Dr. Caron Daley, and sang in a number of choral ensembles in the Pittsburgh and Metropolitan area.

At the Cathedral, Maura has been involved in the production of major performances under the direction of Michael L. Bower, including Mozart’s and Faure’s “Requiem”, Mahler’s “Symphony No. 3”, as well as presently Handel’s “Messiah” and Mahler’s “Symphony No. 2”.  Maura also loves Early Music and directs a small Schola once a month at Our Holy Redeemer Parish in Freeport.  As a member of the Metropolitan Catholic Chorale for the past four years, Maura has loved singing with Dr. Jennifer Donelson and is excited to further bring Sacred Music to others. 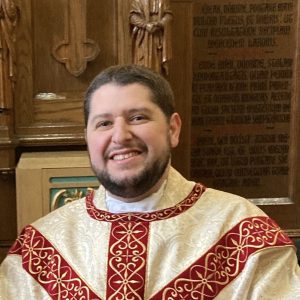 Father Alessandro da Luz has been the associate pastor of Saint Agnes Cathedral in Rockville Centre, NY since June of 2019 and serves as the Master of Ceremonies for diocesan and parish liturgies held at the cathedral. Father da Luz has been a member of the Diocesan Liturgical Commission in Rockville Centre since 2016 and taught Sacramental Theology as an adjunct faculty member at Saint Joseph’s Seminary.

Ordained to the priesthood in 2015, having completed his studies at Saint Joseph’s Seminary, Dunwoodie, he has also served as deacon at Our Lady of Victory in Floral Park, NY and associate pastor of Our Holy Redeemer Church in Freeport, NY. Before ordination, Father da Luz received a Bachelors of Science degree in Mathematics and Computer Science from St. Joseph’s College, Patchogue, NY. In 2021, he earned a Licentiate in Sacred Theology (S.T.L.) from the Liturgical Institute at the University of Saint Mary of the Lake (Mundelein Seminary).

Since 2018, Father da Luz has been a member of the Metropolitan Catholic Chorale. He has presented at a number of liturgical workshops in the Diocese of Rockville Centre offered to the laity and for the ongoing formation of the clergy. He has coordinated workshops in Sacred Music in the diocese with Dr. Jennifer Donelson-Nowicka and the Saint Agnes Cathedral Choirs. As spiritual director, he looks forward to continuing to provide spiritual and liturgical guidance to the Metropolitan Catholic Chorale now under the direction of Clara Bartz and Maura Goodwin. 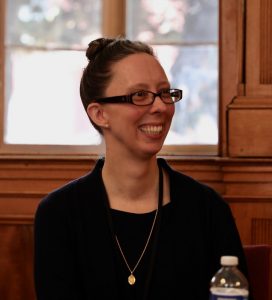 Jennifer Donelson-Nowicka is an associate professor and the director of sacred music at St. Patrick’s Seminaryin Menlo Park, California, where she holds the William P. Mahrt chair in sacred music.

She has co-edited Mystic Modern: The Music, Thought, and Legacy of Charles Tournemire, published by the Church Music Association of America (CMAA). Her publications also include articles in the New Catholic Encyclopedia, Sacred Music, Antiphon: A Journal for Liturgical Renewal, the proceedings of the Gregorian Institute of Canada, the Fellowship of Catholic Scholars Quarterly, the Adoremus Bulletin, Liturgy in the Twenty-First Century (Bloomsbury/T&T Clark), and a chapter in the forthcoming Messiaen in Context (Cambridge University Press).

She serves on the board of the CMAA, is the managing editor of the CMAA’s journal Sacred Music, and is a regular member of the faculty for the CMAA’s annual Sacred Music Colloquium. As academic liaison of the CMAA, she has organized and presented papers at several academic conferences on Charles Tournemire, the work of Msgr. Richard Schuler, and the role of Gregorian chant in pastoral ministry and religious education. She was a co-organizer of the Sacra Liturgia conferences in New York (2015) and San Francisco (2022), and has presented papers at the Sacra Liturgia conferences in New York, London, Milan, and San Francisco. The sometime president, she is currently a board member of the Society for Catholic Liturgy, and served as the conference organizer for the annual meeting of the Society for Catholic Liturgy in Miami. Donelson-Nowicka serves as a Consultant to the USCCB’s Committee on Divine Worship.

Donelson-Nowicka received her DMA in piano performance at the University of Nebraska-Lincoln, where she studied piano with Paul Barnes, Mark Clinton, and Ann Chang in addition to her organ studies with Quentin Faulkner. She received her undergraduate degree in vocal music education and North Dakota State University, where she studied piano with Dr. Robert Groves and conducting with Dr. JoAnn Miller.

Having studied Gregorian chant at the Catholic University of America and the Abbey of St. Peter in Solesmes, for six years Donelson-Nowicka served as a co-organizer of the Musica Sacra Florida Gregorian Chant Conference, and has given chant workshops in dioceses, parishes, and monasteries across the U.S. and Europe. Before coming to St. Patrick’s, Dr. Donelson-Nowicka served on the faculty at St. Gregory the Great Seminary in the diocese of Lincoln, Nebraska, at Nova Southeastern University in Fort Lauderdale, where she taught music theory, music history, piano, and directed the university chorale, and at St. Joseph’s Seminary (Dunwoodie) in New York, where she developed an extensive musical formation program for seminarians and lay students.

As a choral conductor, Donelson-Nowicka has directed seminary, collegiate, semi-professional, amateur, monastic, and children’s choirs. In her new position at St. Patrick’s, she will be working to establish a schola cantorum. She previously directed the Schola Cantorum of St. Joseph’s Seminary, which regularly sang Gregorian and Spanish- and English-language chant, along with an extensive repertoire of sacred polyphony, for the seminary liturgies, while also singing a yearly concert broadcast on Sirius XM, recording a full-length album of music dedicated to St. Joseph, and performing choral masterworks on a concert tour of northern France (2017). She also founded and directed the Metropolitan Catholic Chorale. She has taught extensively for religious orders, including the contemplative sisters at the Monastery of St. Edith Stein in Borough Park, Brooklyn (Servants of the Lord and the Virgin of Matará [SSVM]) and the Benedictine nuns of Priorij Nazareth Tegelen in the Netherlands. She has served as a choral conducting coach for graduate organ students in Yale University’s Institute of Sacred Music. Additionally, she has taught chant to children for many years using the Ward Method (Ave Maria Oratory, Ave Maria, FL; Colm Cille Club, Pelham, NY; Immaculate Conception Children’s Schola Cantorum, Sleepy Hollow, NY), and previously served on the faculty at Cardinal Kung Academy in Stamford, Connecticut.

Dr. Donelson-Nowicka is currently working on a project to adapt the Gregorian chants of the Mass proper for the Spanish language. She also hosts a weekly podcast entitled “Square Notes: The Sacred Music Podcast.”

More information is available at www.jenniferdonelson.com